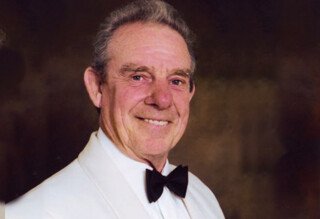 Derek Broadbent began playing the cornet at the age of nine. Following a services career spanning some 8 years, he returned to civilian life as a professional arranger. In 1966 he returned to the world of Brass Bands and in 1973 became the Resident Conductor of the world famous Brighouse & Rastrick Band, there to stay for 10 years. During this period, he conducted them to premier place in the National Finals in 1980 and was also responsible for their "chart-topping" success of the Floral Dance.

In 1984 he became the resident conductor of the equally famous Black Dyke Mills Band and was very much a part of their 1985 "Grand Slam", the year they won every major title.

He returned to Brighouse & Rastrick in 1987 as their Prof. Musical Director for a period of three years. In 1988 he was awarded the "Iles Medal Of Honour" for his services to Brass Bands. Since 1990 he has been totally freelance as a conductor, taking the opportunity to direct many of the U.K.'s top bands. He devotes much of his time to composing and arranging and training the youth of today.

The Very Thought Of You

The Glory Of Cory